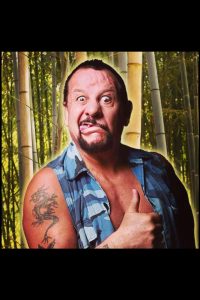 Bushwacker Luke started wrestling professionally in 1962 in New Zealand and continued to wrestle throughout the world as the New Zealand Kiwis,  later they changed their name to the Sheepherders and finally the Bushwhackers.

The Bushwackers joined the WWE in the late 1980’s and went on to great success appearing in all of WWE’s big events like Wrestlemania, Survivor Series, Summer Slam and Royal Rumble. In early 2015, the WWE announced on RAW that the Bushwhackers would be inducted to the WWE Hall of Fame class of 2015.

Luke has held 37 tag team titles, wrestled in over 40 countries and been in the wrestling business for seven decades! He is currently the second oldest wrestler in the world still performing in the ring today!

Luke is the OG IPYU ambassador, supporting IPYU for over 13 years! He would like to thank I’ll Pump You Up for supplying him with all the vitamins and supplements necessary that keep him doing what he loves to do, still wrestling all over the USA and Europe. He is still swinging arms and kicking ass at the age of 75!

Bushwhacker Luke will soon be releasing a book about his wrestling life titled, “Blood, Sweat and Cheers” and will go on sale at Amazon in November 2022. If you would like to get the book early go to Luke’s Facebook page, bushwackerluke and sign up. You will see his picture on the world globe, you can find the ad there and sign up!